“I was asked once how we were able to fight the war in the Pacific, and I said that we fought it just as we had fought it all on paper in the Naval War College. I fought the whole war of the Pacific when I was there in 1923.” [Toll 132-133] 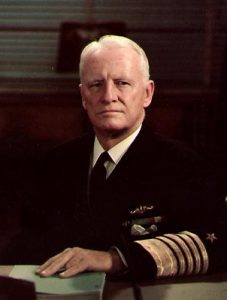 Nimitz’s words to War College students after the war have the feel of overstatement. Can we take him seriously when he says that “nothing that happened during the war was a surprise–absolutely nothing”? [Pellegrino 3:30] (He did except the use of kamikaze tactics.) NWC senior analyst Peter Pellegrino encourages students of history to take the admiral at his word. The College’s extensive war gaming curriculum in the 1920s and 30s prepared the future naval officers of WWII in a way of thinking, of anticipating problems and responding to them. That’s what Nimitz meant by fighting it all out on paper–he and two decades’ worth of students who followed him.

Pellegrino wants us to consider that the so-called War Plan Orange (code for Japan, likewise red for Britain and black for Germany) was not a single plan, written in stone, that foresaw every eventuality. It had roots at least as far back as 1905, when the Japanese navy surprised the Russian fleet at Tsushima Strait, sinking eight of twelve warships. WPO had, according to Pellegrino, been worked and reworked in simulation over a generation and more, each class discovering new problems and finding new ways to respond. The results of each war game was fluid, ever-changing, as in any actual war situation.

At the same time, Navy brass–all graduates of this war gaming process–devised their own iterations of War Plan Orange. At first the Mahanians held sway. At the end of the previous century, Alfred Thayer Mahan had posited that a sea power must concentrate its naval forces for a decisive victory. His influence spread to naval commanders around the globe. Applied to the War Plan Orange, his theory meant the small Asiatic Fleet the  in the Philippines would avoid a fight, escape an anticipated blockade, and await the arrival the main fleet, mobilized from San Diego and through the Panama Canal. Anyone recalling the fate of the Russian fleet at the hands of Admiral Togo could be forgiven for their skepticism. Logistical difficulties might be overcome, but “mid-ocean attrition”–loss of ships to aerial attacks, a tactic Mahan could hardly have imagined–was deemed too costly. War gaming brought this “attrition” to light and made its consequences inescapable.

Enter the Cautionaries, who were not so much cautious as deliberate. Admirals Nimitz and Spruance would eventually be counted among their number, advocating a sequence of island-hopping west across the Pacific, building lines of communication and supply from which to encroach on Japanese-controlled territory. As it happened, this was the strategy the general staff implemented, even if the particulars were always under discussion and strongly argued over.

And not always correct in their application. Pellegrino points out that the Navy generally assumed Japan would employ technology in tactically similar ways to themselves. They did not anticipate the development of Japanese nighttime naval tactics or its enhanced torpedo technology. Nor did planners adequately foresee their own use of submarines or amphibious landings. [Pellegrino 5:17] But, Pellegrino argues, the graduates of the Naval War College, in positions of power during the war, had practiced making the same types of decisions in game situations as they were making during the fog of war in the Pacific. This prepared them in the way that Nimitz meant, speaking in hindsight. 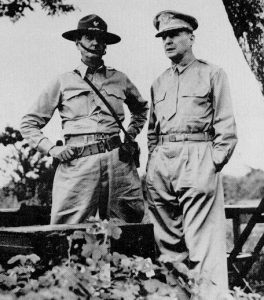 The abandonment of the Philippines in the short  run (“They Were Expendable”!) was foreseen and carried out as planned. [Toll xxxv] Two weeks after the assault began General MacArthur, commander of the United States Army Forces in the Far East ordered a general withdrawal into the Bataan Peninsula. “Put WPO-3 in to effect,” was all he needed to say. [Toll 239] USAFFE was now on its own. MacArthur and his lieutenant General Wainwright would make it up as they went, hoping to hold out until the combined Pacific Fleet and accompanying air forces could come to their rescue. But their short term survival was never really part of the plan.

“For a while we’ll have everything our own way, stretching out in every direction like an octopus spreading its tentacles. But it’ll last for a year and a half at most.” [Toll 273] 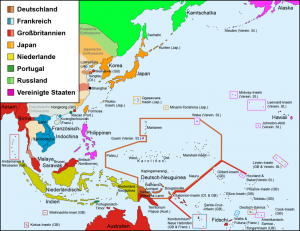 Japanese tentacles grasped a large chunk of the western Pacific in just three months of naval Blitzkrieg, from Burma and Malaya in the west to Tarawa and Wake in the east, as far north as Luzon in the Philippines and as far south as Java in the Dutch East Indies. Admiral Yamamoto’s instincts had been at least half right. Japanese forces had had their “own way” to start the war. But it had all gone so quickly. Neither the General Staff nor the Japanese equivalent of the War College had war gamed the next phase. What to do next was an open question.

It didn’t help that Imperial Army and Navy were locked in a turf war of their own. Though Yamamoto and the Navy planned and executed the attack at Pearl Harbor, in 1940-41 it was the Army that had been “straining at the leash” and the Navy that had cautioned against unnecessary provocations–at least for as long as was politically feasible. [Toll 123] Even with the war progressing as well as either branch could have hoped, the rivalry roiled.

Rear Admiral Ryunosuke Kusaka argued for safeguarding Japanese gains: shoring up interior supply lines, constructing airfields and fortifications on perimeter islands, expanding production of war materiel and training of replacement personnel. These efforts would drive an overall strategic goal of establishing air superiority “through a network of interlocking, mutually supporting air bases,” as Ian Toll put it. [Toll 275] James B. Wood used much the same language when he argued that “defense in depth”–hundreds of airfields on the Philippines, Saipan, Guam, Tinian, Formosa, Ryukus, and Bonins–could have yielded a much different ending to the Pacific War. [Wood 41]

Ryunosuke’s voice was drowned out by commanders determined to take the offensive and to expand the perimeter. The Allies–American, British, Dutch–were unprepared and on their heels, their argument went. There was no better time to strike than now, in the spring and summer of 1942. The Army set its eyes south through New Guinea to Port Moresby, the Navy through island chains to the southeast–Admiralties, Bismarcks, Solomons–toward New Caledonia, Samoa, and Fiji. What these actions had in common was an urgency to take advantage of Allied weakness and the strategic goals of breaking enemy lines of communication and of isolating Australia. They also shared more than a hint of impetuousness. They seem driven more by self-interest in their own military branch than by a unified strategy and coordinated plan of operations. How would any new gains be supported, lines of supply be maintained? Those questions were ignored or deferred.

If that were not enough, a third offensive was thrown into the mix by the hero of Pearl Harbor, Admiral Yamamoto: an assault 3,000 miles in a completely different direction against a target of questionable strategic value: Midway Atoll.

Japanese naval officers, Yamamoto not excepted, had been schooled in Mahanian doctrine as much as their American counterparts. The strike at Midway, with its airbase a mere 1,000 miles from Hawaii, was primarily a means to draw out American surface ships and thus provoke a classic Mahanian encounter. Smashing the U.S. fleet, according to Yamamoto, would do more to isolate Australia than the acquisition of Port Moresby and New Caledonia combined. The Navy General Staff approved his plan in April, with a provision: that Yamomoto divide his fleet and send the smaller part to take Attu and Kiska in the Aleutians. More strategic muddling and anti-Mahanian to the core. But Yamamoto had threatened to resign once before, when the NGS wavered over his Pearl Harbor plan. He could hardly challenge them to call his bluff a second time, in the same way. He accepted the provision.

“In shogi too much fighting causes all-out defeat.” [Toll 461]

The fleet of the Japanese Imperial Navy might have been partly divided, but it was still an awesome armada. Yamamoto’s Midway force included the better part of 200 ships and 700 planes, with four fleet carriers and air forces, collectively known as Kido Butai, forming its core.

A month before his fleet sailed out of Kure Naval Base, Yamamoto assembled his commanders on his flagship super-battleship Yamato to war game the upcoming battle. More than one gaming result revealed the vulnerability of Kido Butai to air attack, a potentially fatal flaw in the plan. In one instance the game was invalidated as too unlikely. In another, the variables were arbitrarily manipulated to yield more favorable results. When Yamamoto asked, pertinently, what would happen if the U.S. fleet turned up suddenly, undetected, famed aviation commander Minoru Genda dismissed the thought with a Japanese idiom, Gaishu Isshoku! (“We shall crush them!”) [Toll 381-382]

This wasn’t war gaming. This was mutual self-delusion. 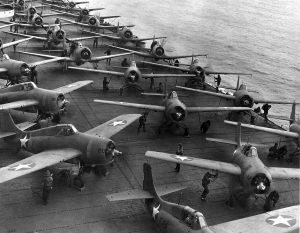 What happened next, as they say, is history. In the space of a few hours’ engagement (including the five minutes that turned the tide of the entire war) the mighty Kido Butai was destroyed–four fleet carriers sunk or sinking, two hundred and forty-eight planes down in flames (or run out of gas with no place to land). Even then, Japanese commanders groped for ways to salvage the mission on which they had staked so much.  Yamamoto ordered his surface ships to hunt down the American carriers (there were three, though he did not know for sure) in the darkness of the night of June 4/5. Admiral Spruance and his commanders played hard to get until morning.  Though his officers egged him on the next morning, Yamamoto finally faced reality. He halted to their pleas with reference to the game he knew and played so well: “In shogi too much fighting causes all-out defeat.”

He ordered all ships to turn toward home.

“To end a war that is going favorably for one’s own side, requires a special, different kind of effort.” 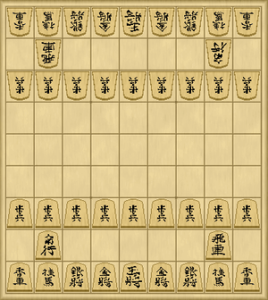 Yamamoto understood the dangers of senshoubyou, the “victory disease” that infected so much of the Japanese military (and civilian population, too) in the heady days of spring 1942. Yet he, too, fell prey to its most pernicious symptom: overconfidence. How? How could he and his staff have been so slipshod in their war gaming? Besides Western forms of knowledge, the Japanese had access to a whole tradition of gaming and philosophy of war that they apparently ignored. Yamamoto had been raised on the wisdom of Shogi. Other Japanese officials must have learned from Go deep ways of thinking about both attack and defense. How were these lessons forgotten in the heat of battle? These questions will be the focus of the next post, leaving the answers as matters of supposition.

Wikimedia Commons for all images