To Rescue the Republic: Ulysses S. Grant, the Fragile Union, and the Crisis of 1876 is Bret Baier’s fourth biographical book. Even so, I couldn’t escape the feeling that he is playing at being a historian (especially since I can speak from experience on this). The book includes not one but two stagey photographs of the erstwhile Fox newscaster earnestly examining archival files. In his acknowledgements he expresses a hope that his two sons, “in the years down the road,” may encounter his book in a history class or just pick it up to read “and think it’s pretty cool your dad did this.”

It’s not as if Baier has nothing to say with this book. Grant, he contends, may be the most important presidential model for our modern polarized times. As existential a threat as the 2020 election may feel to us, it is more than rivaled by the events of 1876.

Oddly, the section on Crisis of 1876, despite its presence in the subtitle, is no more substantial than the other sections of the book, those on his youth, generalship, and presidency. If anything, it’s a bit shorter. Evidently, Baier was undecided whether he wanted to write a more traditional biography or a biographical treatment focused on a central event. He did both (or, perhaps, neither). The point is not merely academic. I found Baier’s writing in the 1876 section more authoritative than in the other sections, as if he had actually done more research there. In it, he articulated the interpretive questions facing the historian, acknowledged that they could not all be resolved conclusively, then gave his considered views. Earlier sections simplified or elided interpretive difficulties. He might have done better to give them less space and give more emphasis on the eponymous crisis.

The issue of Grant’s alleged alcoholism is one controversy that Baier fails to resolves satisfactorily. I had always heard that General Grant was a notorious drinker, but Baier casts doubt on the fact. Yes, he was disciplined for inebriation in his early Army duties in California. Yes, he probably did not hold his liquor well. On the other hand, Baier seems to say, he was not regularly or often impaired. He was not a drunk. His reputation was just that: a reputation, stoked by military and political enemies to keep him down. This is an interesting thesis, but Baier, not a true historian, does not really close the case. He provides insufficient footnotes, so the reader doesn’t learn on what scholars Baier bases his interpretation. I, for one, was left to consider an interesting thesis but unsure of its general acceptance.

The notorious corruption of the Grant administration is another example. In Baier’s telling Grant was naïve, trusted in friends rather than accomplished politicians and administrators, and basically surrounded himself with venal people. This is convincing as far as it goes. Everything the reader learns about Grant in the book shows a man of quiet integrity. Yet it is not quite satisfying. Why was Grant weak-willed in this particular regard? What do other biographers say on the issue? Without an acknowledgment of questions, the account reads merely as Baier’s opinion. 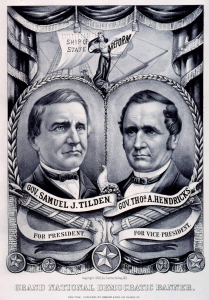 This is the nature of the genre, I suppose: celebrity author with a built-in platform of readers who trust him instinctively and are uninterested in historiographical questions. Baier’s 1876 section holds true to this general form, yet its narrative verve seems more alive, Baier’s interpretations more deeply considered, his interest more fully engaged: “[Grant] and [Secretary of State Hamilton] Fish left the table and rushed to the Western Union office, where they heard troubling news of ‘the wrecking of trains, tearing up of telegraph wires, and general disturbances.'” [264] The evident election of Democratic candidate Samuel Tilden over Republican nominee Rutherford Hayes appeared to be in process of being overturned by electoral shenanigans: foul play. Would Grant send in federal troops to quell the violence? They were obviously needed but just as obviously a provocation to white southern voters? “The idea depressed him,” writes Baier.

Reluctantly, Grant sent detachments to the disputed states, Louisiana, Florida, and South Carolina. At the same time he articulated an even-handed principle to guide partisans in the heated coming weeks: “No man worthy of the office of President should be willing to hold it if ‘counted in’ or placed there by fraud. Either party can afford to be disappointed in the result tainted by the suspicion of illegal or false returns.” [265] Words that speak to us as meaningfully today.

It helped that the aggrieved Democratic candidate was also even-keeled. Advised to advance his case aggressively, Tilden demurred. “He felt that a contested election was a constitutional issue whose resolution would be found in the law books. He had no stomach for a street fight.” [264] When he learned of a bribery plot to accumulate more votes for his candidacy in South Carolina, Tilden was quick to put a stop to it. Baier is convincing that fraud was rife on both sides and that the true result is impossible to know, though more likely should have gone to Tilden.

Democratic Party chairman Abram Hewitt‘s later words paint a picture of a nation paralyzed but also on the edge of fracture: “Business was arrested, the wheels of industry ceased to move, and it seems as if the terrors of civil war were again to be renewed.” [266]  A former Confederate general was tasked to lead an army to the capital to enforce a Tilden inauguration. “Across the country other militias were organizing. Some planned standard protests. Others planned to use force.” [273]

The tension reaches its climax in chapter 12, “The Presidency Saved,” as Baier spreads the state electoral count in five chunks over fourteen pages. The real elapsed time of the process was indeed a full month, February 1 to March 2, just in time for the scheduled Inauguration Day. Grant’s main contribution was the appointment of an electoral commission to promote trust in a final outcome. Disruptions in the South Carolina tally made him fear his gambit would fail. Secondarily, he had the sagacity, according to Baier, to accept the proposed Grand Bargain from former Confederate soldier, Edward Burke. The Republicans would keep the presidency; Democrats would see their candidates installed in the disputed states’ governors’ mansions, as well as federal troops permanently removed from the South. We know “the rest of the story.”

In his concluding chapter, though, Baier argues convincingly that we are wrong to convict Grant of ending Reconstruction and ushering in a century of Jim Crow. (It helps that he cites Chernow and Foner for support.) Over three hundred pages, Baier has built a portrait of a man who is both admirable and flawed. For this reader, the flaws make him all the more admirable, appealing. Grant is worthy of our regard precisely because he makes no pretension to being a hero. He never did. Grant muddled through like we all must do, and, on the whole, did so effectively. Baier makes the point in his penultimate paragraph, while drawing Grant’s relevance to our own situation today:

Seeing the tumult in our political system today, Grant might call upon us to rise above the immediacy of the crisis we face and view it more broadly. The origin of our democracy is self-rule, and these divisions are baked into our story. They feel cataclysmic in the moment because everyone is so emotional, but in the historical context these upheavals can be seen as part of an ongoing battle to be the nation we defined in our Constitution.

Baier is not the first to make this essential observation–division is baked into our story–but he does so effectively here in the context of the story of Ulysses Grant, the soldier, the president, and the mediator through the electoral crisis of 1876.