I implied–well, stated outright–that Rickenbacker was an indulgent father. That’s not quite right, of course. Human behavior is always more complicated than a single word can capture. That he could seem indulgent from a few lines of his letters is significant. For Rickenbacker was very much a product of the nineteenth century, a buck-it-up, nose-to-the-grindstone, pull-your-self-up-by-the-bootstraps kind of guy. And those Victorian attitudes came across in his letters, too. When they did, I was reminded of the discomfort I sometimes felt in the presence of my practical-minded grandfather.

My Poppy was born fifteen years later than Eddie Rickenbacker and into a more comfortable, stable situation, yet the two shared some significant experiences. Eddie dropped out of school before eighth grade; my grandfather went to work after graduating from high school. Yet both experienced hazing on the factory floor in their first jobs. (Apparently, grown men in those days couldn’t resist pushing 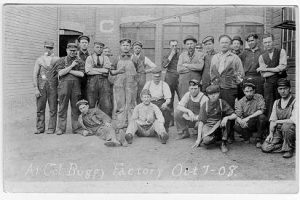 around anyone less powerful than themselves.) Both determined to work themselves out of the ranks of the powerless, and both had the smarts to do so. Eddie rose through automotive engineering, which he learned through an “international” correspondence course. My grandfather attended night school to earn an associate degree in chemistry. Both built family wealth as practical men of business in growth industries of the twentieth century, airlines for the one, mass-produced faux-leather shoes for the other.

“But what are you going to study?” my grandfather would as college approached. I was tongue-tied. I had no idea. It was, I understand now, a defining feature of my class (or, perhaps, generation): not to have to commit, to hold dear the possibility of one’s ideas without regard for the hard, cold demands of material necessity.  Rickenbacker encouraged Bill in his pursuits of the mind, but concern for the practical lingered always at least in the background, and occasionally front-and-center. “I want you to know that your choice of Harvard has my 100% approval, as well as Mother’s,” he wrote, encouragingly, before adding, “However, I would appreciate your giving some thought to having one of your courses Business Administration, because it will stand you in mighty good stead no matter what walk of life you choose or follow.”

Later, after Bill had knocked around a bit after Harvard, Rickenbacker revealed where his true interests lay: “The day may come,” he told Bill, “when you would want to join Eastern Air Lines and learn all about it, and eventually follow in my footsteps.” Four months later he picked up the same theme: “I am hoping that you might be interested in as time goes on is to join me in Eastern where we can have a lot of fun together and you can be of great assistance a progress very rapidly.” [sic] He had practical goals for Bill, but the self-interest (“…we can have a lot of fun together…”) comes through just as strongly. Bill knew himself well enough to resist/ignore the offer. Eddie was wise enough to let him follow his own course. 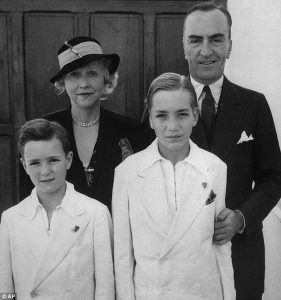 The wisdom may have been hard-won, as it is for many of us. Earlier in fatherhood, Rickenbacker sounded less sure of himself. He resorted to blatant bribery to try to straighten out his wayward son: “You know how badly Mother and I want you to be on the honor roll and unless you can be, I am afraid I am going to hold off buying you a new set of golf clubs, which I dislike doing very much as I want you to have them.” Two years later, he forewent the carrot and wielded the stick, threatening, “If you cannot change your way of thinking, then I am going to have to change it for you, which I do not want to do. In other words, …you probably would be much better off in a military school, which is not an easy life and where they teach you these traits by compulsion instead of persuasion. That, I do not want to do….” These words struck me, as I read them, as a bit clueless, certainly outdated, and surely less than effective.

Yet, as his child grew into personhood, Rickenbacker grew into his role as father. He developed a strong epistolary relationship with his son and his words of reprimand begin to sound more restrained and, probably, more effective: “I note in your letter a tendency on your part to belittle the so-called exclusive clubs and exclusive people. Remember it is very easy with your attitude to become the isolationist instead of them, and if you let this attitude multiply, you will find yourself a snob instead of the other fellow.” He goes on in a similarly reasoned way, but what he doesn’t say is as important as what he does say. For he never reminds his son that he, Bill, chose Harvard over Dartmouth, which had been Eddie’s first choice. He never stoops to any version of “I told you so.” 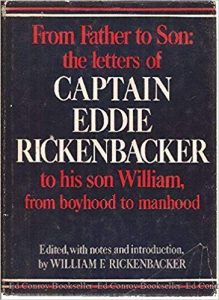 After receiving news of an apparently disappointing report card, Rickenbacker wrote, “I would appreciate your writing me just what classes you have been cutting and why. In other words, give me the whole story as you honestly see it without any attempt to alibi yourself. Just lay the cards out on the table as I have always tried to teach you, and remember, it is by far the best way at all times.” No harsh reprimands, as might have been expected, even justified. Just a firm exhortation to take responsibility (with perhaps a hint of micromanagement).

As Bill entered the adult world, Rickenbacker’s letters abounded with even more advice, if that were possible. In one nine-hundred-word missive, I counted twenty-two different pieces of advice or admonition. I was reminded of my own father’s letters, infrequent, but when they came, long and full of “when-I-was-a-boy” self-revelations and school-of-hard-knocks insights. I disliked those letters, every one. I disliked the way my father revealed himself in embarrassing ways to me while never seeming to show much understanding of who I was. Though I gave him credit for trying, I felt letdown that his words rarely helped me feel closer to him. I am reminded of these feelings every time I write a certain kind of email to my own children. I find it hard to avoid the same tendencies to advise and refer to my past experience…and to feel wholly ineffectual.

Rickenbacker might have annoyed his son to some degree (maybe), but he might have largely avoided it by writing so frequently (almost every Sunday)—and by getting Bill to reciprocate, if less frequently. Listen to how Eddie handles an important exchange of ideas with his son: “What you say…is interesting to say the least, and I agree to a degree with your thinking…” and “I cannot quite agree with you…”. Notice how he allows his adult son autonomy by respectfully disagreeing but not expecting him to change his mind. A few years later, Rickenbacker explained his interests to Bill forthrightly: “I hope you will always ask for my advice or help in any of your difficult moments as long as I am around to give it.” But he hastened to add, “Not that it will always be the correct answer but it helps to balance your own judgment and that is true of all of us.” 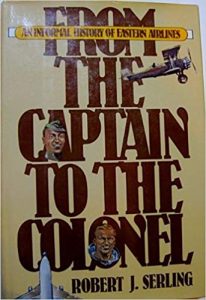 So, there it is. I end, once again, with Eddie the softy. It seems a paradox. A man who was so often hard-edged was just as often sentimental. A man who dressed down incompetence both harshly and publicly, could be generous and kind almost to a fault. A staunch conservative allowed liberal values to leak out with regularity. A man reviled by many was beloved by even more. My list of these dichotomies-held-in-tension jogged a memory of a similar litany I had encountered earlier. In From the Captain to the Colonel, Robert Serling described Rickenbacker the Eastern Air Lines general manager as “a dictator with the saving grace of sentimentality, a corporate potentate with a conscience, an egotistical autocrat with a strange streak of humility, a feudal baron demanding total allegiance, yet not quite capable of suppressing both affection for and a sense of responsibility for the serfs.” Now I understand what he means.

People are complicated creatures, not easily subsumed under tidy descriptors. This is as for America’s Ace of Aces as it is for anyone else. In what might have been his final comment on the matter, Rickenbacker seemed to want to place himself on the hard-ass side of the equation. Asked about his parenting after rereading his own letters published in From Father to Son (1970), Eddie, both surprisingly and predictably, said, “I think I’d come down harder on him now.”

Serling, Robert J. From the Captain to the Colonel: An Informal History of Eastern Airlines. New York: Dial Press, 1980: 144.