The Chicago Tribune declared him “a speed-mad, matrimony insulated-bachelor.” He “has but one love,” it said, “and that the thoroughbred of steel with which he pursues prize money.” Whenever he was asked if he had a girl, Eddie would insist, “I have always had one, the most wonderful sweetheart in the world, my little mother.” Really? Was he such a achievement-focused celibate? Was he really such a mama’s boy? In fact, the historical record shows clear glimpses of an actual human beneath the intensity he usually showed to the world. A human who, like the rest of us, felt sexual attraction.

As young as ten years old, Eddie “had this little sweetheart,” Blanche Calhoun. He would take walks with her after Sunday School and give her pictures that he had painted. She remained important to him for years. When he was promoted to head salesman and manager of Columbus Buggy Company, it was Blanche he chose to impress with his large salary. Somewhat clueless, he bought her a diamond ring and was surprised to learn the implications his gift carried. He skipped town even faster than you could say “Firestone-Columbus,” the name of his company’s new automobile.

A year earlier in Texas, Eddie’s eagerness to get back to town for a date with a girl led to a desperate attempt to revive his company automobile…which led to an unexpected solution to the overheating problem he had been sent to Texas to solve…which led to his promotion…which led to…well, a life that garnered at least five different biographies. 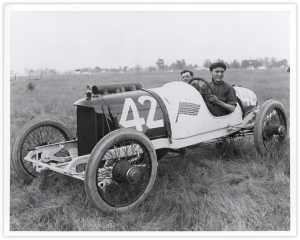 During his “speed-mad, matrimony-insulated” years, ages 22-26, he did, in fact, have a social life. He swore off alcohol and cigarettes, and made it a rule to retire by ten o’clock on race nights. (He was no Barney Oldfield!) But Eddie was striver and a climber. He wasn’t above schmoozing; he was wise enough to nurture the contacts he made. Many proved useful over the next four decades of his professional career. In L.A. he spent time on the Sennett set with Roscoe Arbuckle and Mabel Normand. He met Clifford Durant, son of G.M. founder, William Crapo Durant. More significantly, he met Cliff’s wife, Adelaide. She was destined to be one of the three most important women in Eddie’s life.

But first: the war. Recognizing that he was taking part in the most monumental event of his generation, Rickenbacker began keeping a journal in March 1918 to document his part in it. Accounts of aerial combat forms the bulk of the diary, yet references to attractive women are surprisingly numerous: seventeen in all over eight months of journal-keeping. They start on third entry: Eddie described his date as a “French maiden dark and rather small but has a sweet disposition as most French girls have.”

In July and August, suffering from an undiagnosed mastoid infection, Rick spent six weeks in hospital. Predictably, he developed crushes on his nurses: “Was visited by Miss Chase, a nurse here and a very sweet girl. Am hoping she will have dinner with me after I’m better. Have seen her before and have always wanted to meet her. As you see, fate is still kind.” And: “My little girlfriend came to the room and we had a very interesting chat. She’s a little Dear. Certainly would be a happy boy to have such a girl wonder about me now and then.” Then, in one of his longest sustained commentaries in the entire diary: “While sitting on the balcony listening, a little girl who is nursing here came up and ask me to go down with her. Would I? Gee, ten years of my life for the chance. Have seen her only a few times before but always came into me a thrill such as has been unknown in my past life. Then, after dinner she bought me some ice cream. Hardly let myself feel she may care. (Yet)”

An accurate diagnosis and effective surgery allowed Rick to rejoin his squadron in time for the St. Mihiel Offensive beginning September 12. Over the next eight weeks, he was promoted to commanding officer of his squadron and tallied twenty official kills against the enemy, on route to becoming America’s Ace of Aces. At the same time–somehow!–he was able to pursue a mini-romance with actress Lois Meredith–“that enchanting vision,” as one reporter described her. 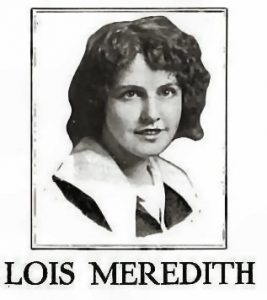 He first saw her in a show at Rembercourt Aerodrome held in one of the hangars. Meredith, a modest success on stage and screen, was in a troupe of six American performers, entertaining members of the A.E.F in the war’s final weeks.  Three days later, Rickenbacker was introduced to the young actress at an officers’ party. His entry for the day: “Am very fond of Lois Meredith and know she is in favor of my acquaintance.”

Rick met her three times over the next two weeks, driving up to Fleury or down to Bar-le-Duc on days when pursuit patrols were rained out. He saw her twice more while on leave in Paris during the final weeks of the war. They dined at Maxim’s and even went shopping together. The former Columbus street urchin splurged on a greatcoat for 1,450 francs (probably about $4,000 today!). After the armistice, Lois Meredith exited the Eddie Rickenbacker story for good. 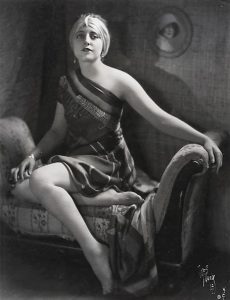 And Priscilla Dean entered it. Back in the States, Dean had told a reporter that she was “affianced” to the flying ace and papers ate up the story. “A hasty introduction” at the 1916 Grand Prize “led to a sturdy friendship in which lurked the germs of love,” gushed the reporter. When Dean bought her own motor car, the gallant Eddie showed her “how to adjust the carburetor.” Now the race driver was America’s Ace of Aces. Dean cashed in on her brief connection and wrote him a letter. An avid correspondent, Eddie responded perhaps a bit too effusively, using language eerily similar to some of his earlier diary entries (see above): “Gee, I’d give some years of my life for just one week in dear California…,” and, “Gee, I wish you were here to nurse me a wee bit.” After he saw the article, Eddie hustled this one back as fast as he had the diamond ring to Blanche Calhoun a decade earlier.

It wasn’t clear what Eddie would do with himself after the war. He had reached the highest peaks in the worlds of both auto racing and pursuit flying. What was there left for him to accomplish? Eddie would come up with something. Early on in his quest, he ran into Adelaide Durant on the streets of New York. Her husband had revealed himself to be an abusive drunk. Eddie was an attractive, if slightly rough-on-the-edges, war hero. The divorce took two years to finalize, but in September, 1922, Eddie and Adelaide were wed. 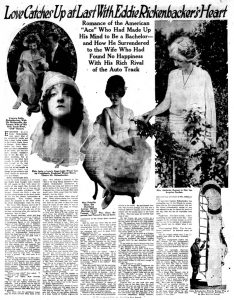 They took a six-week honeymoon to Europe, and for Eddie, at least, it was everything he imagined a honeymoon could be. Arriving in France, he wrote, “It’s just a dream. I wonder at times if it can be true, there seems so much happiness in life.” (There was life after the thrill of war, and it was good.) Upon returning to the States, he wrote, “I have never been happier in my life and I hope Adelaide feels the same way.” He felt as if the life before him would be an extended second honeymoon, “for we are returning to Detroit and our little home, which…is going to be a real love nest.” It sounds to me like the striver was at last ready to settle–settle down, become a husband and father, maybe even a bit of a homebody.

He didn’t. He returned to the mistress he was never able to give up: work. Work of the kind that is completely absorbing, that could bring him recognition and contribute substantially to the world. To assist him in this work he hired the woman who was one of the three most important in his life: Ms. Margaret Shephard. For forty years and more, Sheppy was Rickenbacker’s most trusted aide. She accompanied him in the office all six or seven days of the week. She typed almost every official word he wrote. She covered for many of the mistakes he made.

There is no evidence of sexual feelings between employer and employee. If anything, Sheppy played a kind of maternal role for Rickenbacker (despite her younger age and his actual mother’s continued existence). Eddie had always adored his mother. She had interceded on his behalf against his father’s rages, and, after his father’s death, he strove to look out for her. He paid off the mortgage on her house at about the same time he bought a diamond ring for Blanche Calhoun. Sheppy looked out for the adult Eddie into his dotage, and Eddie always treated her as family. Looking back, William Rickenbacker, the Captain’s elder son, declared Sheppy to be “as much a member of the family as I am.” 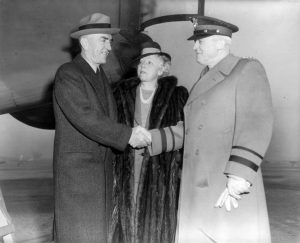 And Adelaide? Sexual intimacy between husband and wife must have been relatively rare in the Rickenbacker marriage. (He didn’t have time! As he responded to a reporter who asked him if he thought aviation would ever take the place of sex, “It has for me son.”) Even so, the two looked out for each other, as much as mother and son had. Adelaide’s squeaky-wheel persistence was as instrumental to her husband’s Pacific raft rescue as Eddie’s gutty determination. She prodded the government to extend its search and rescue operation three more critical days, which made the difference in his (and the crew’s) ultimate survival.

In their eighties, both husband and wife declined. Eddie underwent emergency surgery for an aneurysm. Adelaide was gradually going blind. The best ophthalmological surgeon Eddie could locate was in Switzerland so they boarded a plane for the Continent. Soon after arrival, Eddie contracted pneumonia and died.

Good thing Sheppy, his aide of forty-eight years, was on hand to arrange affairs and see that Adelaide, his wife of fifty-one years, returned safely to the United States with his ashes.