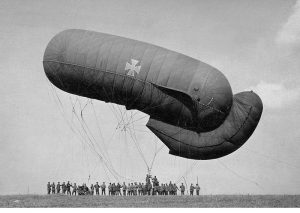 On D-Day, September 26, 1918, Allied artillery shelled enemy trenches, beginning at Zero Hour, 4:00 am.  Infantry units went “over the top” an hour and a half later, crossed No Man’s Land and attempted to take those same trenches.

Zero Hour for aviation squadrons came at 5:20 am, giving them just enough time to reach their targets at twilight.  Their targets?  Observation balloons, affectionately known by the Germans as Drachen, “dragons,” and by the French as sauçisses, “sausages”–big, fat German ones, roughly two hundred feet long and fifty feet in diameter.

Observation balloons were tethered on wires to motor trucks, and raised or lowered as needed by gas-powered winches.  Fifteen hundred to 2,000 feet in the air, observers in the Drachen‘s dangling basket could see as much as eight miles into enemy territory, observing the accuracy–and inaccuracy–of their artillery’s guns.  Communicating with the ground over telephone wires, they helped adjust the aim of their guns in real time.

On D-Day, newly assigned captain of the 94th Squadron Eddie Rickenbacker selected five men to accompany him in the attack of two selected Drachen, three to each balloon.  Captain Eddie pulled up the rear.  Flying over Verdun in the early morning darkness, he was awed by the line of artillery fire stretching in an unbroken line to the west, like a “giant switchboard,” he wrote, emitting “thousands of electric flashes as invisible hands manipulated the plugs.”

Rickenbacker followed the Meuse downstream, north, on a trail as familiar as “the path around the corner of my old home.”  He knew at just which bend in the river to bear left to find his Drachen.  His men rendered the over-sized gas-bags into balls of flame even before he had reached them.  So he flew on to Damvillers where he knew of another observation balloon for the taking.

Again, he was beaten to the punch, this time by an unknown compatriot in another squadron.  Before he could make his next move, an enemy aeroplane hove into view.  Rickenbacker confronted the oncoming machine, and the two exchanged spurts of bullets before pulling out, unhit, apparently.  In the second pass, Rickenbacker gained the upper hand and sent the Fokker spinning to the ground.

Before Captain Eddie could enjoy the full taste of victory, he felt a “sudden ugly jerk” in his motor.  He shifted the throttle down to reduce the pounding and the vibration.  He imagined the worst: for him, falling behind enemy lines and being taken prisoner.  Not for the first time, luck shined on Eddie.  He reached the Rembercourt Aerodrome without incident.

On the ground, Eddie discovered that one blade of his propeller was missing.  It must have been hit in the exchange and broken off only after the enemy plane had fallen.  Lucky Eddie had flown home with half a propeller!  Despite his squadron’s successes in the air, troops on the ground were slowed by stiff German resistance and a “brutal tangle of crisscrossed ravines.”  It would take American Expeditionary Forces a full month to push through the Argonne Forest at the cost of 120,000 casualties.  During that month and more, Eddie would shoot fifteen German aircraft out of the air–including four Drachen.